In this article we will be looking at the the new Tribute mechanic with help from our special guest — Flame-Wreathed Phoenix. 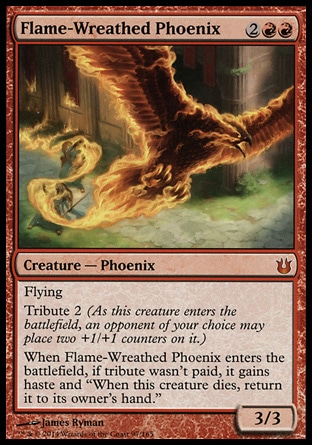 Tribute 2 (As this creature enters the battlefield, an opponent of your choice may put two +1/+1 counters on it.)

When Flame-Wreathed Phoenix enters the battlefield, if tribute wasn’t paid, it gains haste and "When this creature dies, return it to its owner’s hand."

Full rules text for Tribute is:

702.103b Objects with tribute have triggered abilities that check “if tribute wasn’t paid.” This condition is true if the opponent chosen as a result of the tribute ability didn’t have the creature enter the battlefield with +1/+1 counters as specified by the creature’s tribute ability.

That is why your opponent can “pay Tribute” вЂ” allow your creature enter the battlefield with additional counters. If we assume that the ability successfully triggers and resolves, the opponent has to choose between a big creature and something worse: 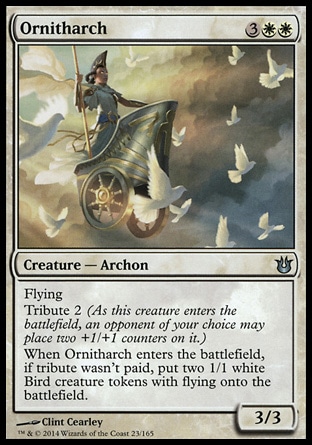 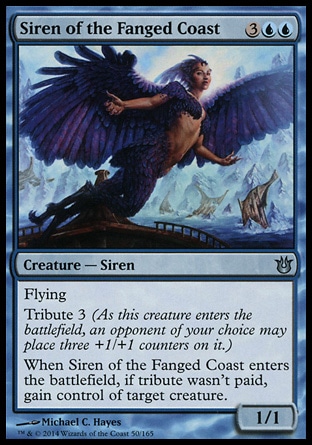 An opponent must choose between a 4/4 flyer or a 1/1 flyer with the ability “I’ll take control of your creature until our game is finished, thank you very much” 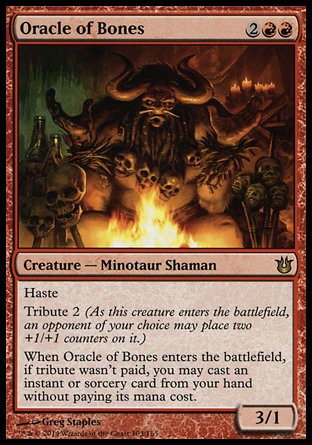 A 5/3 with haste or a 3/1 with haste which allows you to cast an instant or sorcery for free? 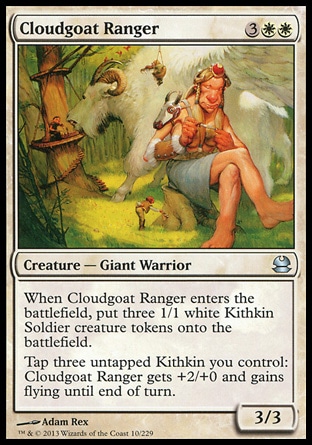 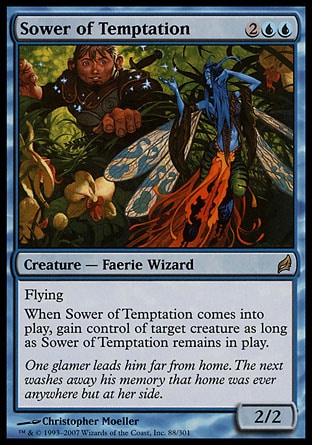 A 5/3 with haste or a 3/1 with haste which allows you to cast an instant or sorcery for free?

For the creature with Tribute it doesn’t matter how it appeared on the battlefield and where it was before.  Of course, the easiest way to get a creature is to cast it. So, because choice for Tribute is made after the creature spell has started resolving, your opponent cannot respond to the choice or counter spell it. We have only one opponent in a duel. If they tell you whether they want to pay Tribute or not, it means that they allowed the creature to appear on the battlefield.

If Stolen Identity targets a creature with Tribute, as the token enters the battlefield the opponent must decide whether to pay tribute or not. Please note that neither the counters nor the abilities gained are copied by Stolen Identity. 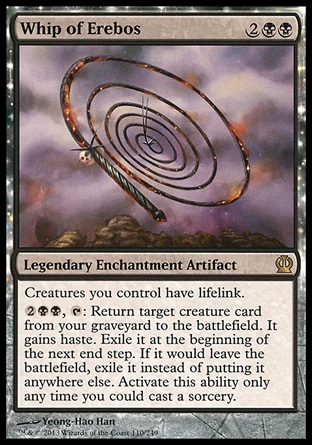 Whip of Erebos’ activated ability puts a creature card from the graveyard onto the battlefield.  If this creature has Tribute, the ability functions as if the creature has been cast.

Tribute is a static ability, so it never goes on the stack — that means no one can respond to it and it can’t be countered. Furthermore, when a creature enters the battlefield, a spell or an ability are resolving, and thus no player has priority at that moment and no one can do anything.

Tribute doesn’t target your opponent, therefore Leyline of Sanctity won’t help them. In a multiplayer game you can choose any opponent. However, your second Head in Two-Headed Giant is not an opponent!

If the selected opponent chooses to pay Tribute, the creature enters the battlefield with additional +1/+1 counters. At no point in the game is there a moment when the creature is on the battlefield without counters. However, as far as the rules are concerned these counters are considered to be “placed on a creature” and thus are affected by Doubling Season and Corpsejack Menace's replacement effects.

If the chosen opponent refuses to pay Tribute, as soon as the creature enters the battlefield, the condition is met and the triggered ability part of Tribute triggers. After SBA have been check, all abilities that triggered are put on the stack and it is that this point the active player gets priority (and is able to cast instants or activate abilities).

Triggered abilities on the stack, exist independently from the object (in the case of Tribute the creature) that created them on are not concerned about what happens to the creature. Even if the creature leaves the battlefield before the trigger resolves, it still resolves. This can be prevented by a sudden end of turn effects like Time Stop, being countered by using spells like Disallow or by fizzling when all of its targets become illegal.  If none of the above happen then the triggered ability resolves and the player who controls the triggered ability, gains it effect.

Now, that you have familiarised yourselves with the Tribute mechanic, lets take a closer look at our star guest Flame-Wreathed Phoenix.

The Phoenix has Tribute 2. This means that when it enters the battlefield, chosen opponent can decide between the Phoenix entering the battlefield with two +1/+1 counters or fulfiling a triggered condition of the conditional triggered ability. Or put simply, the opponent can either give the player a 5/5 flyer or a Phoenix that returns to its owners hand when it dies, to be cast again and again and again (assuming that Hushwing Gryff is not in play).

It's worth noting that Hushwing Gryff only affects Enter the Battlefield triggers (like the one granted to the Phoenix if the opponent chooses not to pay Tribute). Not the replacement effect which is generated by the static ability. If the triggered ability doesn’t resolve (because of something like Stifle), we get a 3/3 with flying without any additional abilities.

If Phoenix dies before its EtB-trigger resolves, it stays in the graveyard, because it doesn’t have the ability which allows it to return to its owner’s hand yet.

If the EtB-trigger resolves, Phoenix gains two abilities. One of them is static — Haste — which allows it to attack on the same turn it entered the battlefield. The second is a triggered ability: “When this creature dies, return it to its owner's hand”.

Bonus: Two for One Sale on Now!