Some people say 2013 is a Black Snake or Water Snake year. Well, let’s talk about the zodiac animals. 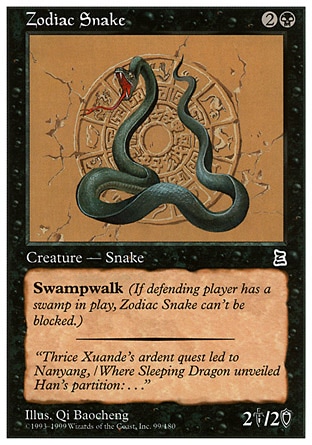 Swampwalk (This creature can’t be blocked as long as defending player controls a Swamp.)

All cards from Zodiac cycle were printed in “Portal Three Kingdoms” set, based on the famous Chinese historical novel Three Kingdoms. There are 12 cards in the cycle — the number of zodiac signs. If you assume that the entire zodiac cycle was painted by one artist, you are wrong: there were two of them. Each painted 6 pictures, and among these cards you will not find white or blue ones. Black and red cards were painted by Qi Baocheng, and the green ones by Ai Desheng.

Each card except the Dragon has Landwalk (Zodiac Snake has Swampwalk). We have already talked about this ability, so look at the Snake and enjoy its coolness. :)

If you line these cards up in Chinese Zodiac order, starting with Snake, you get the following poem/story:

Thrice Xuande’s ardent quest led to Nanyang,
Where Sleeping Dragon unveiled Han’s partition:
“First take Jingzhou, next the Riverlands;
On that rich region, base your own royal stand.”
Near death in Baidi, having reigned three years,
Bei sadly placed his son in Kongming’s care.
By six offensives from the hills of Qi Kongming sought to change Han’s destiny.
But the time of Han had run — could he Kongming not tell? —
That night his master star fell past the hills.
Jiang Wei alone still strove with might and main:
Nine times more he fought the north — in vain.
Zhong Hui and Deng Ai next led armies west:
And to the Cao, Han’s hills and streams now passed.
Cao Pi, Cao Rui, Fang, Mao, and briefly, Huan —
The Sima took the empire in their turn.
Cao’s abdication changed the face of all;
No mighty battles marked the Southland’s fall.
Three kings no more—Chenliu, Guiming, Anle.
The fiefs and posts must now be filled anew.
The world’s affairs rush on, an endless stream;
A sky-told fate, infinite in reach, dooms all.
The kingdoms three are now the stuff of dream,
For men to ponder, past all praise or blame.