Today we shall learn to get creatures without casting them. AEther Vial will help us use all the advantages of such method.

At the beginning of your upkeep, you may put a charge counter on AEther Vial.

{T}: You may put a creature card with mana value equal to the number of charge counters on AEther Vial from your hand onto the battlefield.

AEther Vial is a colorless artifact. It has two abilities.

The first one is triggered, we recognize it by the word “at”. It triggers at the beginning of upkeep of the player in control of AEther Vial. When this ability resolves, the player may put a charge counter on AEther Vial. Or he may choose to not put any, if he doesn’t wish to.

AEther Vial’s second ability is activated (we recognize it by the colon in its text). It doesn’t have any activation limits, so you may activate it any time you have priority. You may do so any number of times in a turn provided you are able to pay its cost (tap). You will certainly need additional effects for that.

Hypothetically, AEther Vial’s second ability may become impossible to use in two cases:

In the first case, we deal with the so called summoning sickness. That means, it will matter how long AEther Vial has been under your control.
In the second case, you will have to somehow eliminate that effect. 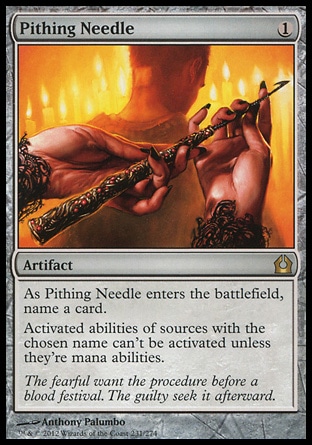 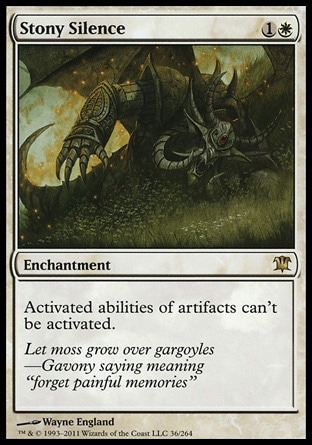 AEther Vial is shut down by both the Needle and Stony Silence. You may not activate AEther Vial’s ability until you get rid of these effects.

None of these cards impacts AEther Vial’s triggered ability.

It’s important to understand that AEther Vial may have counters of other type(s) on it, but none of those will influence the effect of the second ability. 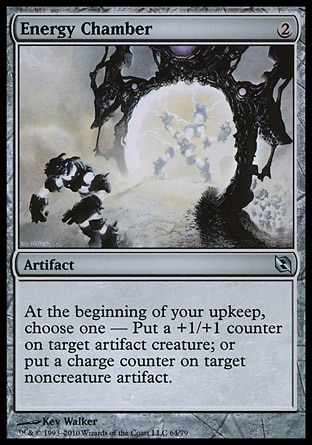 Charge counters may appear on AEther Vial in different ways. For example, Energy Chamber may put one on it. 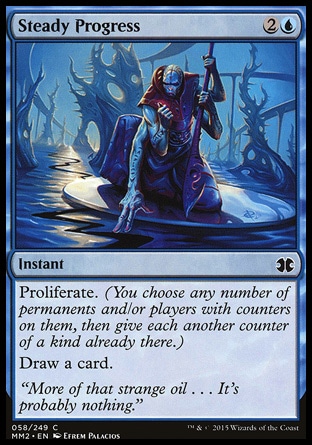 Proliferate is an extremely useful ability if you need to increase the number of already present counters. It will not put anything on an empty Vial though. 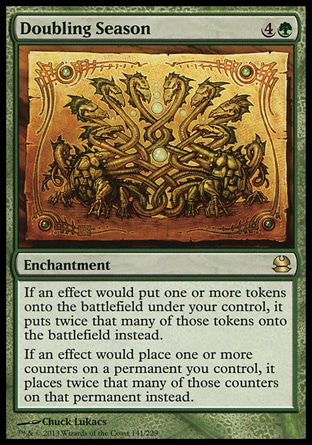 Anyway, we activate the second ability and live up to its resolution. Namely when the ability resolves is the game concerned with the number of counters on AEther Vial.

If AEther Vial is not on the battlefield by the time, the game will use the last known information about it. So it’s not ultimately useful to destroy an opponent’s Vial in response to activating the ability. 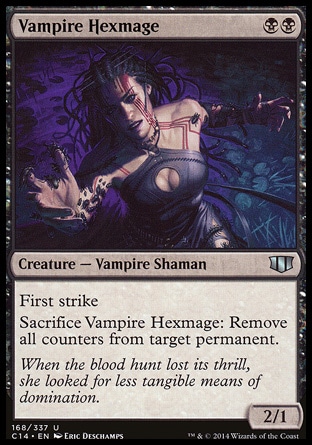 However, you may hinder your cunning opponent’s plans and remove the counters: Vampire Hexmage’s second ability removes all counters of all types.

Proliferate may be useful here too: you may increase the number of charge counters on AEther Vial to such point that it becomes useless to your opponent.

As AEther Vial’s second ability resolves, the player in control of the ability may put a creature card from his or her hand onto the battlefield. That card’s mana value must be equal to the number of charge counters on AEther Vial.

Mana cost is what’s written in the top right corner of a card (in the top left corner for "future-shifted" cards). Mana value (previously Converted mana cost) is the mana cost in its digital equivalent, regardless of type and color of mana. Effects that change the casting cost do not change the mana cost of the spell, thus they cannot change its mana value. 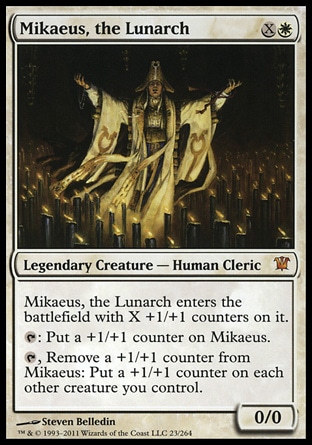 The value of X that’s not determined in the card’s text is 0, so Mikaeus, the Lunarch will hit the battlefield without counters, and its trifling chances of survival lie in additional effects.

Phyrexian Metamorph has mana value=4. Don’t even think about "paying up two life" and making its mana value equal to 3. That’s blasphemy. 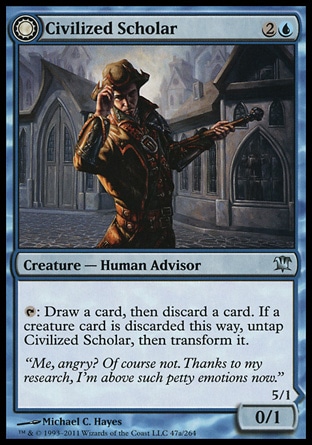 Two-faced cards outside the battlefield are considered to have only the day face. So we take the day face’s mana value for such cards.

A creature put onto the battlefield through AEther Vial’s ability is not cast. It may not be countered. The opponent may keep admiring the counterspell in his or her hand; it is useless here, unless it counters the ability (Voidslime). You do not have to pay any additional costs; a creature put onto the field this way is not affected by effects limiting its casting process.

You may not put a morph off a Vial, since the Morph ability allows to only cast a creature face down.

You don’t need to pay {3} or to reveal a Merfolk card with Silvergill Adept, since you’re not casting it. 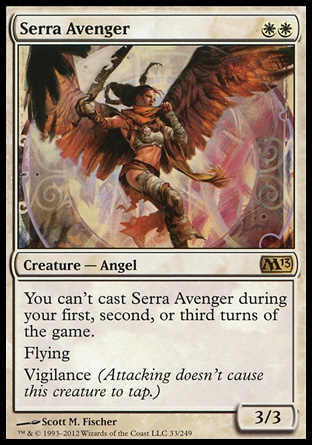 You may put a Serra Avenger during any turn of yours (and in others’ turns too). The limitation only impacts casting it.

You may activate AEther Vial’s ability without counters and put a Dryad Arbor on resolution, since it is a creature card and its mana value=0 (according to the rules, cards without a mana cost have mana value=0)

You may do so even in your opponent’s turn, and in your turn after you have already played a land. All that is because Dryad Arbor is put onto the battlefield, not cast.

Good news: when a creature is put onto the battlefield, Enters-the-Battlefield triggers go off.

Bad news: triggers that go off when a creature is cast do not go off (it isn’t cast, right?). 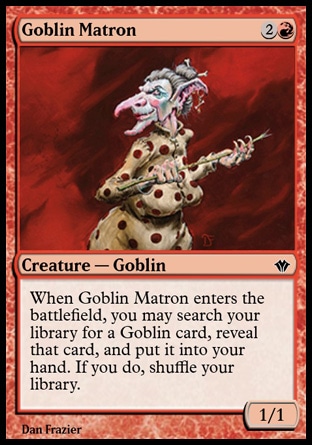 If you put Goblin Matron, her ability will trigger. 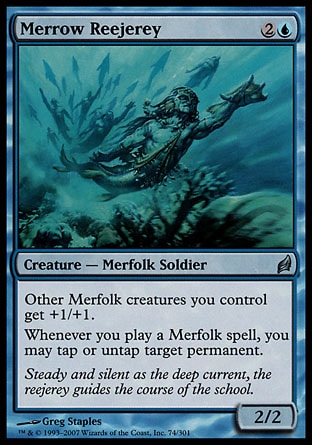 If you put a Merfolk, Merrow Reejerey’s trigger will not go off.

A creature put onto the battlefield through AEther Vial’s ability is subject to summoning sickness (unless it has haste). But since you may activate AEther Vial at any moment including the end of your opponent’s turn, that’s the best moment to put a creature onto the field. As a result, you will [continuously] control it since the beginning of your next turn; it will be ready to attack, and you will be able to activate abilities with tap symbol in their activation cost.

Do not forget that sudden appearance of a creature may bring unpleasant surprises to opponents. 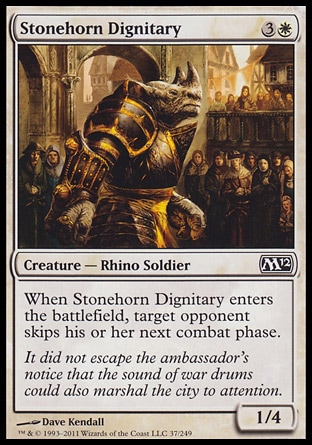 It’s timely to put Stonehorn Dignitary onto the battlefield during your opponent’s first main phase, not during the combat phase when its effect can no longer affect current turn. 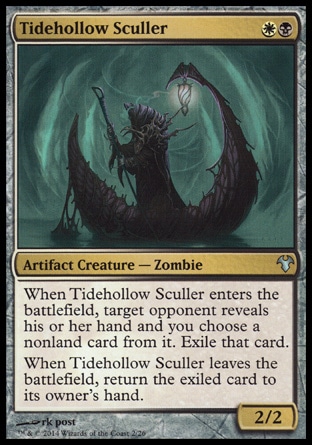 Tidehollow Sculler will be very timely during your opponent’s draw step.

Any Lord appearing on the battlefield during the combat phase will help your opponent suffer maximum damage and/or casualties.

To brush it up, here are a few examples when the Vial is not all that useful. Suppose the cunning opponent casts a Very Sneaky Spell targeting your beloved minion creature. 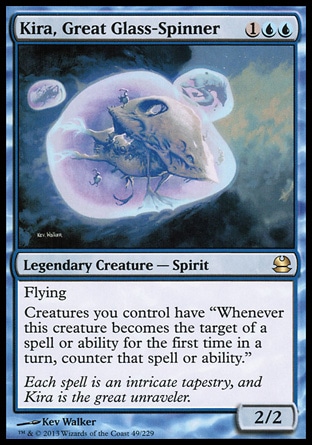 If you activate AEther Vial in response and put Kira, Great Glass-Spinner onto the battlefield, Kira’s trigger does not go off, because the triggered event has already happened before Kira has hit the field. 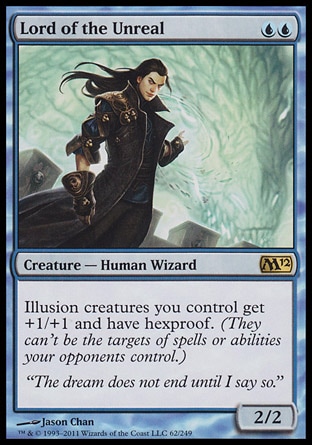 РЎStatic abilities work differently. For instance, Lord of the Unreal will make your Illusions illegal targets for the Very Sneaky Spell. Most Illusions have the ability "When ~ becomes a target of spell of ability, sacrifice it" though, and such abilities will have triggered by the time the Lord comes in.