This time we'll talk about colors of Magic, loops and interaction of Grindstone and Painter’s Servant. 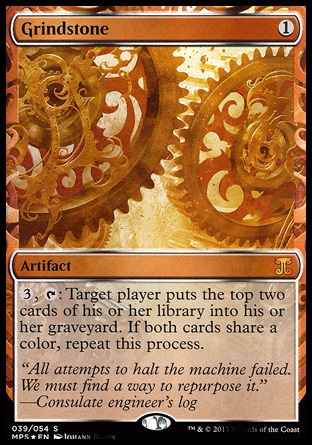 {3}, {T}: Target player puts the top two cards of his or her library into his or her graveyard. If both cards share a color, repeat this process.

I personally recall the anecdote about a programmer and a can of shampoo, and I also remember how many times I’ve been asked about Grindstone and a particular Progenitus, two Progenituses, three Progenituses…

Okay, let’s look at the text. The first thing we should see there is the colon which indicates that this is an activated ability. Which means,

we can activate it any time we have priority;
As long as Grindstone isn’t a creature, its abilities may be activated regardless of how long it has been under your control. If you have heard something about summoning sickness, but do not quite understand what it is all about, you need to read about it in detail.
the ability that’s already on the stack (i.e. an already activated one) does not depend on its source;
It is pointless to “remove” Grindstone in response to its ability being activated, that alone won’t change anything in the ability’s fate. You should remove the other card in the combo, but we'll get to it later.
its is only effective when it resolves.
Finally, in order to get an ability effect, you need to resolve it. If it gets countered (Disallow), nothing happens.

The second thing we need to see is the word “target” in the ability text which informs us that the ability is targeted. In fact, it targets a player. The target is chosen when the ability is activated. It must be legal both when it is chosen and when the ability is resolving. If it isn’t true, in the first case (activation) the game is rewound back to the moment when you are about to activate it, mana sources untap, and you get a punishment corresponding to the REL of the event. In Competitive events that would be a Warning. In the second case (the target is illegal at resolution) the ability doesn’t resolve due to having lost its only target. They call that “fizzle” in Magic slang. 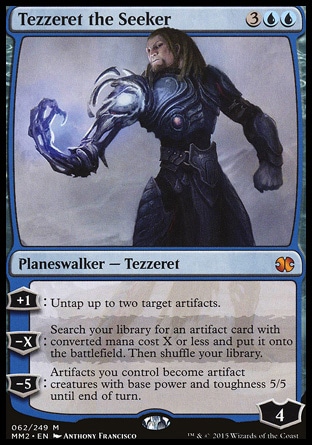 You already know that this Planeswalker can turn artifacts into creatures. Once this happens to Grindstone, it begins to matter how long you have controlled it. It may so happen that its ability may not be activated. 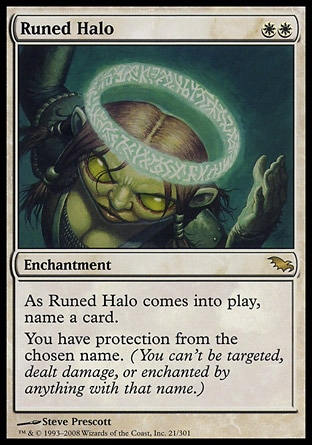 Alright, we activated the ability and it lived till its resolution. That’s when we are supposed to perform the actions instructed by the effect. These are putting two cards from target player’s library into his or her graveyard. What do we do if there is just one card? Nothing special, we perform the effect as fully as possible, in this case it will be putting one card into the graveyard.

Some cards really don’t like to go into graveyards, such as… Progenitus!

Progenitus has a static ability which generates a replacement effect. This means that while that ability exists, Progenitus simply cannot go into the graveyard. It is instead shuffled into its owner’s library. Grindstone is sad.

Unlike the Progenitus, Emrakul has a triggered ability which goes off when she hits the graveyard. In our case that is while Grindstone’s ability is resolving. After it finishes resolving, Emrakul’s trigger goes on the stack and it may be responded to. When the trigger resolves, the entire graveyard will be shuffled into the library.

Let’s carry on performing the effect. We need to see whether the milled cards share a color… Now, we need to make a full stop here.

Color is object’s characteristics. There are only five colors in Magic: blue, red, green, white and black. Objects can have multiple colors or have none. If the card has blue and white colors, it is white and blue, but but not red, not black and not green. The most common mistake to consider it like “blue-white”. This color no such color in Magic. “Colorless”, obviously, is not a color. That word just says that object has no color at all.

How do we determine a card’s color? There are just three ways:

Phyrexian Metamorph is blue due to the phyrexian blue mana symbol in its mana cost. 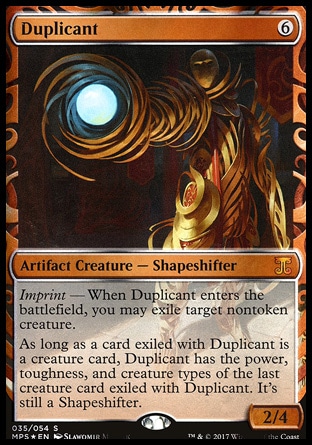 Duplicant is colorless because its mana cost doesn’t have colored mana symbols. 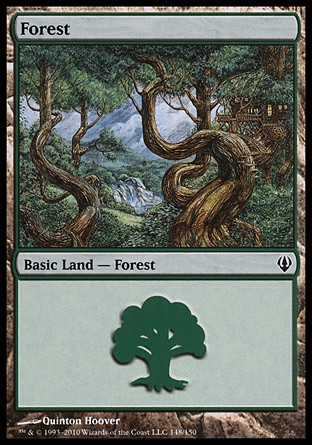 Forest is colorless because it has neither a mana cost nor a color indicator. 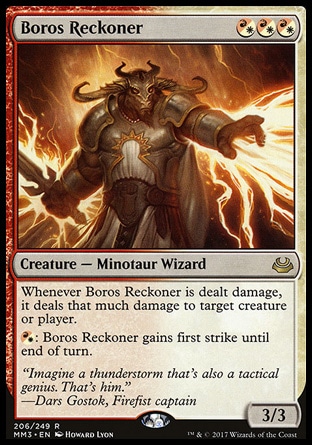 Boros Reckoner is both red and white since it has the red/white hybrid mana symbol in its cost. 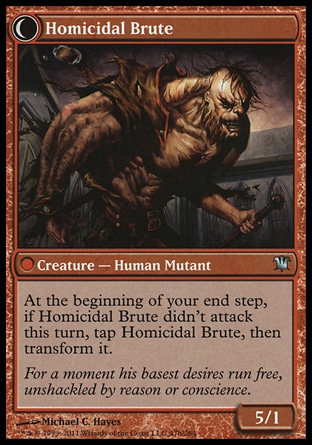 Homicidal Brute is red on the battlefield which is conveyed to us by its color indicator. However, in other zones we only see the front face of a double-faced card, which is Civilized Scholar, and that one is blue due to its mana cost. 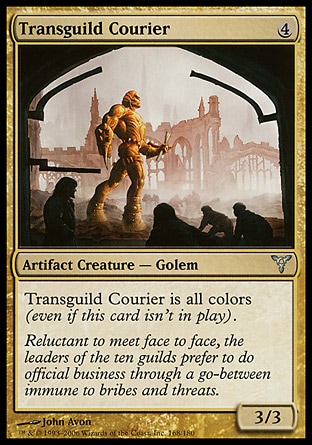 I hope it is clear about the color now. Let’s consider comparing colors.

Cards that share a color must at least have a color. If either or both of the compared cards are colorless, it is pretty obvious they cannot share a color. Even in a mono-colored deck, any land will stop the process. That’s where Painter’s Servant comes to aid. 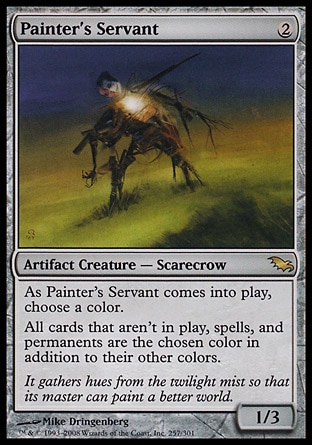 Painter’s Servant grants the chosen color to all cards in all zones, as well as to tokens on the battlefield and spells on the stack. Any card in any zone will be that color in addition to any colors it already is. If a card has no color (as almost all lands are), it gains it and is no longer colorless.

Thus, if two cards from the first part of the effect share at least one color, the process is repeated: we mill two cards again and compare the colors. This continues as long as the condition is met each time.

If a Painter’s Servant is on the battlefield, any two cards will share at least one color — the one chosen for Painter’s Servant. That means, the target player’s entire library will be put into his graveyard, unless: 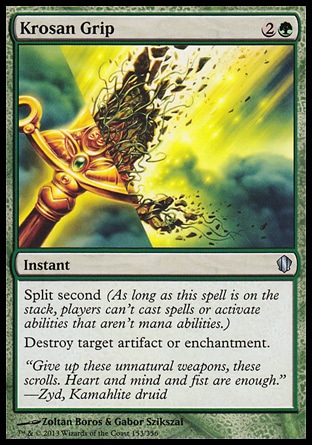 Painter’s Servant gets gripped in response to activating Grindstone’s ability. 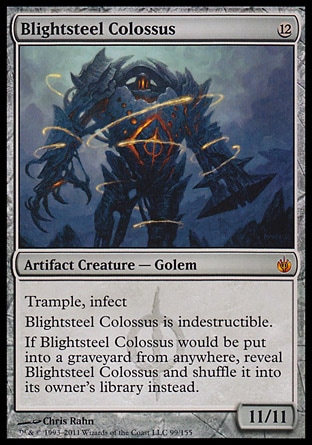 From now on, we suppose Painter’s Servant is on the battlefield.

If the target opponent’s deck has one Progenitus, it will sooner or later become the only card in the deck: as soon as you mill the Progenitus and another card, the Progenitus will be shuffled back into the library, but since both cards shared a color, the process will be repeated.

Only when Progenitus remains alone, the comparison will not take place, and Grindstone’s ability will finish resolving.

What if the cunning opponent’s deck contains two problem creatures, and they are the only cards left in the library?

Oh well, they will get shuffled into the deck over and over. And since they share a color, the process cannot be ended. We get an infinite loop, and that loop only contains compulsory actions. According to the game rules, the game ends in a draw.

By the way, the player to choose whether to play or draw first is the one who made that choice in that previous drawn game.

Leyline of the Void

Let’s have big time fun: add a Leyline of the Void to the battlefield and see what we get.

If we control Leyline of the Void and the opponent’s deck contains an Emrakul, she cannot go to the graveyard, as Leyline of the Void’s replacement effect will send her to Exile instead. Emrakul’s ability has no chance to trigger, so there won’t be any massive shuffling when Grindstone’s ability finishes resolving.

If there happens to be a Progenitus instead of Emrakul, we will face two different replacement effects affecting the same object. In this case, the object’s controller chooses the order to apply them; and if the object has no controller (cards in graveyards don’t really have one), its owner does. As a result, the Progenitus’s owner will decide which effect to apply first. If the Progenitus goes to the library it doesn’t go into exile, and vice versa.

What if there are two Progenituss?

Two Progenituss and a Leyline is nuts. When (if at all) we arrive at the stage when the deck contains just the two Progenituss, we'll face a loop again. But this time, the player has a choice of the order to apply those effects. This situation is different from when we had an infinite loop resulting in a draw.

This time, after the player declares the shortcut, he will have to choose to apply the Leyline first, thus sending one or both Progenituss to Exile and ending the loop.

In this case, the term “Shortcut” doesn’t mean a tournament abbreviation we sometimes use to shorten or simplify game concepts. When loops occur, players express the number of times they wish to replay the loop before walking out of it. For instance, “I shuffle both Progenituss into the deck 9001 times!” Refer to rule [715. Taking Shortcuts] for more details. 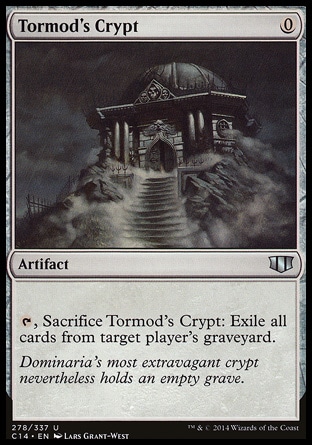 — What if we target the opponent with a Tormod’s Crypt in response to Emrakul’s trigger?

— Not much. Tormod’s Crypt’s effect will exile all cards from the graveyard, and as Emrakul’s trigger resolves there’d be nothing to shuffle in.

— What if we cast Extirpate in response to the trigger?

— As Extirpate resolves, the target Emrakul and all other copies of the card will be exiled. But that doesn’t prevent her ability from resolving and shuffling the remaining graveyard into the library. And yeah, you can target an Emrakul in a graveyard with Extirpate!

Some music to conclude:

“Back to the Grindstone”